Proud to have raised $10,000 for Music Health Alliance

October 21, 2019 – Nashville, TN – On the second Thursday of October, Nashville residents and music fans celebrated the return of Dancin’ In The District by doing exactly what the event’s name suggests: dancing. The Riverfront rocked with Leftover Salmon, JoJo Herman & Slim Wednesday, Space Capone, Alanna Royale, and Tennessee Muscle Candy, along with Nashville Legends Jam featuring Pat McLaughlin, Rodney Crowell, The McCrary Sisters, and Joe Bonamassa. And in true Nashville fashion, the house band—Kenny Greenberg on guitar, Michael Rhodes on bass, and Chad Cromwell on drums—was legendary, too. The mission of Dancin’ has always been to reconnect locals and the music scene to Nashville’s famed Lower Broadway district. Founder, Tom Morales, puts it this way, “As Nashville begins to face another identity crisis we felt the revival of such an event as Dancin’ in the District would be a perfect opportunity to remind locals, especially those new to Nashville, that Lower Broadway was once a platform for music discovery. This free community event brought music back downtown and we’re working hard to do it again.”

Dancin’ was the first of many events to be produced by Acme Radio Company, the newly established 501(c)(3) non-profit arm of Acme Radio Live. Carl Gatti, Acme’s Director of Entertainment, expounds, “From day 1, Acme Radio has focused on the discovery and preservation of Nashville. As the city grows, we have gained a better understanding of just how important our original mission statement is. To continue our focus, we launched the Acme Radio 501(c)(3) to expand upon discovery and preservation opportunities throughout the community and allow other like-minded businesses, brands, charities, artists, and individuals help us accomplish this goal.”

This year’s event supported the work of Music Health Alliance (MHA), a non-profit organization whose free advocacy services help protect, direct, and connect members of the music community with healthcare and financial solutions. Dancin’ raised $10,000 and presented MHA with a check on Oct. 18, Heal The Music Day. Morales comments, “Music Health Alliance shares the same mission as Acme Radio Company and Dancin’ in the District which is supporting the authentic music community here in Nashville. These musicians are living with a day job and a dream, and MHA makes sure they don’t have to worry about how they’re going to receive healthcare while they’re doing it. The partnership was an easy choice and we couldn’t be more honored to present them with this check.”

Shelia Shipley Biddy, Music Health Alliance COO and Certified Senior Advisor echoes the sentiment. “We are blessed to have the continued support of Acme Feed & Seed. Standing on the stage at Dancin’ and staring out at a huge crowd listening to music made me proud that Music Health Alliance was named a charity partner for the evening,” says Biddy. “Many of the band members and performers that night were persons helped by one of our MHA advocates. Our efforts to keep the music playing helps those who not only play the music but those who love the music as well. What an honor to be part of this special evening. This donation will support us so that our services can always remain FREE to those who need them.”

About Acme Radio Live
Launched February 2016 inside the historic Acme Feed & Seed, Tom Morales’s popular restaurant and bar on Lower Broadway in downtown Nashville, Acme Radio Live has made a conscious effort to include all aspects of Nashville’s long-standing musical traditions, honoring the past through preservation and the future by discovery. From music to wellness, food to sports, and everything in between, Acme Radio Live hosts more than 16 unique lifestyle programs that harness the community spirit of Music City.

About Dancin’ in the District:
Dancin’ In The District—or just Dancin’ for short—was dreamt up in the early 1990s to reconnect Music City with the music that gave it its name. “In the ’80s Lower Broadway struggled to maintain its connection to the music scene Nashville was famous for,” says Nashville restauranteur and Dancin’ founder, Tom Morales. “At the time, this street was full of pawnshops and porn shops, and had been abandoned by locals.” Morales and a group of like minds formed Dancin’ with the help of Mayor Phil Bredesen, the idea being to throw a free weekly party with music at its hub. “Dancin’ quickly became the catalyst to bring people downtown and was a selling point for investment on Lower Broadway,” notes Morales. “The Titans were the title sponsor at one point and the Predators engaged as well. The riverfront ‘happy hour’ quickly grew to crowds of over 10,000 people and the vitality of Lower Broad was back.” Morales, along with Dancin’s entire team, is optimistic about bringing back Dancin’, and in turn, bringing locals back downtown to enjoy their city again.

About Music Health Alliance:
Since 2013, there have been more than 10,000 examples of members of the music community from coast-to-coast who have received free assistance from Music Health Alliance. The 9-person team has saved more than $47 Million in healthcare costs, including insurance premium savings, medical bill reductions and discounted medications, in six years. As advocates, Music Health Alliance fights so those in our industry never have to feel alone in a health crisis. Thanks to the direct efforts of Music Health Alliance, members of the music community across the country have gained access to lifesaving cancer treatment, transplants, medications to treat Parkinson’s, end of life care and many other crucial services. Its services are free to any person who has worked in the music industry for two or more years, or who has credited contributions to 4 commercially released recordings or videos. Spouses, partners, and children of qualifying individuals may also receive access to the non-profit’s services from birth to end of life.

To learn more about Music Health Alliance’s free services and how you can take part in “Heal The Music Day,” contact MHA at 615-200-6896 or info@musichealthalliance.com and learn more at HealTheMusic.com. 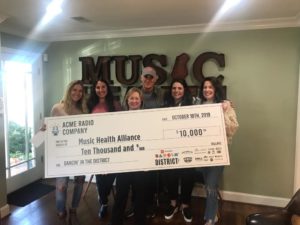