DUELING DUOS – THE DONJUANS VS KATHY MATTEA AND SUZY BOGGUSS 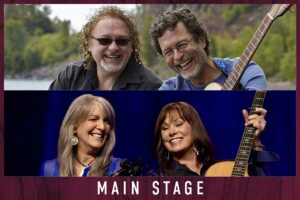 All proceeds will go to Music Health Alliance, which offers free programs and services that help musicians find affordable healthcare and financial resources during medical crises. Music Health Alliance is music’s resource for healthcare solutions and access. MHA has now served 20,000 music industry professionals and their families and secured over $100 million in healthcare cost reductions to Heal the Music.

By their name you might assume that the DonJuans rely merely on their good looks. However, you will be impressed to know that the group includes two GRAMMY® Award-winning songwriters, Don Henry and Jon Vezner. Their song, “Where’ve You Been” (recorded by Kathy Mattea) was the first song in country music history to sweep all major song of the year honors including the GRAMMY®, ACM®, CMA, and the Nashville Songwriter’s Association International (NSAI) awards. In the nearly 25 years since “Where’ve You Been,” Don and Jon have performed in venues from the Bottom Line in New York City to the Bluebird Café in Nashville, sharing stages with artists as diverse as Joey Ramone, John Hartford, Michael Johnson, and David Crosby. Kathy Mattea and Suzy Bogguss have each carved out careers in popular music with country chart hits spanning two decades. Suzy’s “Outbound Plane”, “Aces”, and “Someday Soon” are among the many songs beloved by country music fans around the world, as are “Where’ve You Been?”, “455 Rocket”, and “Eighteen Wheels and a Dozen Roses” from Kathy’s deep well of material. Friends since their early days in Nashville, they had only found a few opportunities to collaborate musically, notably with “Teach Your Children”, their Grammy-nominated track from 1994’s “Red, Hot + Country” compilation.

DINE AT THE SHOW

Watch the Story
See All